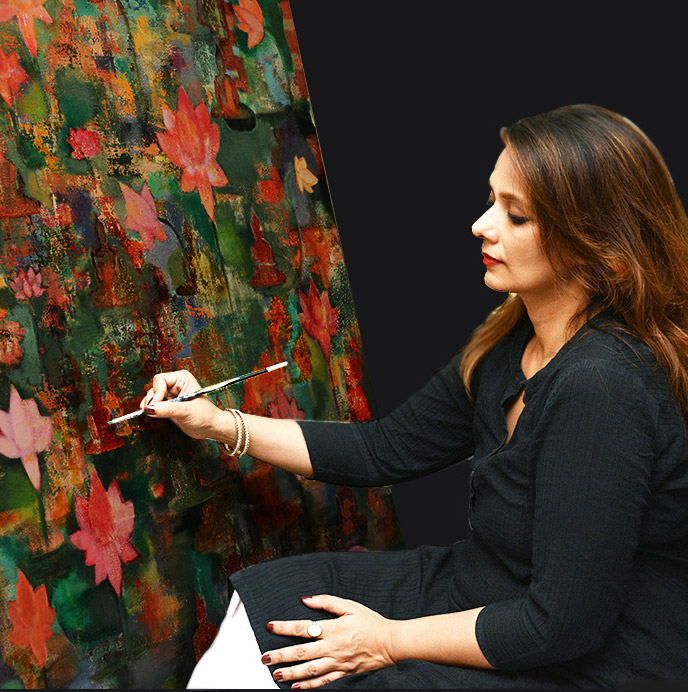 Sunayana was born and brought up in central Delhi, and hails from a family of engineers, doctors and professionals. She is the youngest of three children and she was always encouraged to express herself in the arts. As a girl she spent many evenings after school, Modern School, Barakhamba Road, to study Hindustani Classical music and singing, easel painting, life studies in graphite and charcoal. She went on to study art at the Triveni Kala Sangam, Sri Ram centre and has spent many evenings at the Kamani Auditorium and the Lalit Kala Akademi, absorbing the arts. She graduated in English Honours from Indraprastha College . She continued to write poetry but began painting passionately and with focus by 2005. Sunayana had her first exhibition at the Ashoka Hotel Art Lounge where she displayed 25 works and has grown from strength to strength since then. She has displayed her works at Visual art gallery, Habitat centre, Triveni kala Sangam, Lalit kala Akedemi, many five star hotels, her paintings are in many private collections in London, Muscat, Dubai, Virginia USA, New Zealand and Australia. The artist is also associated and works along with many leading interior designers to create works of art enhancing various homes and offices in Delhi and NCR.

My work is a spontaneous overflow, I work with paintbrushes and palette knives, I like the figure to be visible, yet hidden behind layers of paints. A lot of the surface is scratched off and then repainted on canvas.

I am deeply influenced by ancient Indian art found in caves, temples and palaces reflecting the rich heritage of my country, India.

Lotuses are in my sub conscious mind they fascinate me with their symbolic beauty and mythological significance.

Artist's work has been displayed in Delhi Sena Bhawan South Block. Being a self taught artist, Sunayana has numerous, shows to her credit in the past five years and her works are a part of prestigious collections in India, Chicago, Vienna, Auckland and Dubai.

In an age that seems to delight in the squalor of urban dystrophy it takes courage and a certain naivete to attempt to paint a beautiful female nude, bestowed with an almost ethereal quality. Sunayana Malhotra's lyrically beautiful nudes possess that quiet courage, that dare to speak of the beauty that people yearn and covet only to finally let go of in their twilight years as they move toward a more philosophical groundswell.

For two decades or more in the humanities, various political arguments have been put forward against beauty: that it distracts us from more important issues; that it is the handmaiden of privilege; and that it masks political interests. However, in her defining novel On Beauty and Being Just, author Elaine Scarry argues the beautiful object renders 'fairness', an abstract concept, concrete by making it directly available to our sensory perceptions. With its direct appeal to the senses, beauty stops us, transfixes us and fills us with a "surfeit of aliveness." Scarry argues and defends beauty from the political arguments against it while indicating that beauty does indeed guide us in the direction of a greater concern for justice.

While Sunayana's work definitely provides us with that 'surfeit of aliveness' it addresses the idea of justice in a manner that is subtle and perceptible only to the discerning, because the form of Sunayana's protagonist, is not an idealised body. It is in fact culled from reality and embodies both beauty and its imperfections through an oblique representation of the self.

In her first big solo exhibition, Beneath the Skin, Sunayana addresses these issues of self and makes a strong case and posits a fresh interpretation of beauty. Through her powerful canvases she foregrounds the fragility, inherent transcendence and ephemeral nature of beauty.

In her works, not only does the body of the protagonist indicate that it is not an idealized form, resistant to the ravages of time, but it moves towards formlessness, and a vividly colourful abstraction. For instance in her works such as Her Body Speaks, the body is covered by rivulets of red that appear like stigmata or slashes of blood across the tender pink skin of the protagonist, leading to the atrophy of the body.

In other canvases like Innate and Pensive the artist employs swatches of blue, gold and browns that envelope and soothes the female form as it bares its pure nude self to the viewer. In works such as Unfulfilled, Traversing and Ecstatic, the protagonist is faceless, in others she is just a headless torso confronting the viewer with her anonymity and in other works like, Intuitive she is a full-blooded woman who looks you in the eye. In another suite titled Arousal, it is bloody reds, tawny browns and luminescent gold that mill around her form creating an energetic blast of slashes and splashes, that give birth to chaos and dynamism. This provides a contrast around the still, beautiful and patient woman warrior. Sometimes she is surrounded by blots of black that resemble a flock of birds in flight and the woman rises like a totem above all that is earthly.

In a post feminist era, it may appear dated to attempt a feminist reading of the female nude, given that so many arguments for and against the idealised feminine mystique has gone before. However given that painting the female nude has mostly been the prerogative of men and there are fewer women painters in India who engage with the nude study as a form of self portrait, it remains a temptation that one can barely resist. The nude painted by a woman begs the question; do women paint nudes differently from men? This question has been posited around the works of artists like Amrita Sher-Gil and Anjolie Ela Menon, both of whom have delighted in the female nude, during the 1940s to 1960s and then the 1970s and 1980s

While Sher-Gil's nude portraits are said to be underwritten with homo-erotic undercurrents, some of Menon's early nudes are a reflection of an idealised self, where looking into the mirror can be likened to an act of auto-eroticism, or self love. Sunayana's work is neither openly feminist in its attempt to subvert the gaze nor is it purposefully voyeuristic in its effort to lure the gaze. What it does is that it simply takes a quiet delighting in the female form, which is a reflection of the self, made more poignant by the onset of age. As the hips grow fuller and the breasts submit to the ever-present pull of gravity, the expansion of the body lends itself to a formless mass of colour. This is where Sunayana's works like Threshold, Vivacious, Spontaneous, Overflow and Brimming, moves towards abstraction and becomes a lake of colour within which the nude drowns in.

One can think of it as Plath's lake where, "A woman bends over me/ searching my reaches for what she really is/.Each morning it is her face that replaces the darkness/ In me she has drowned a young girl/and in me an old woman/Rises toward her day after day/ like a terrible fish." These lines of hard-edged truth are couched beautifully in Sunayana's work because she does not take the route of a darkly prophetic Plath nor does she assume the slightly judgemental tone of the Greek myth of Narcissus, instead she carves out a middle path that celebrates the nude yet tinges it with a bittersweet melancholia.

While the myth of Narcissus talks of the beautiful man who was so enchanted with his reflection in the waters that he grew into a flower, as a 'punishment', for being in love with his own reflection, the Indian pantheon of the Saptamatrikas has a more inclusive approach towards beauty. It includes Kaumari, the woman with a mirror in her hand as an essential embodiment of the seven important avatars of the feminine energy of the Gods. Shringar is one of the nine Rasas, which usually translated as erotic love, romantic love, or as attraction and more importantly as beauty. Rasa means "flavour", and the theory of Rasa is the primary concept behind classical Indian arts including theatre, painting, music, dance, poetry and sculpture.

The Rasa of Shringar is prevalent in Sunayana's work that is both contemporary and classical in its approach. To enjoy this Rasa without judgement is what the artist invites her viewers to do.

Georgina Maddox
(Georgina, blurs the lines of documentation, theory and praxis by operating as a critic/curator and involving herself in visual art projects. She is currently working with The India Today Group as Senior Assistant Editor.)